Over one hundred and fifty guests gathered at the Cholmondeley Room in the House of Lords to celebrate Mulan Foundation Network 2016 Annual Awards and Reception. Lord Clement­ Jones CBE, Mulan Ambassador was the Sponsoring Peer and it was great that we are able to hold this event at such a prestigious venue.

The Board of Trustees congratulate all the winners of 2016, and greatly look forward to more Chinese women coming forward to be recognised for their achievements in the future. We strongly believe that there is so much that Chinese women can offer to other Chinese women and the societies and business communities in which they live. 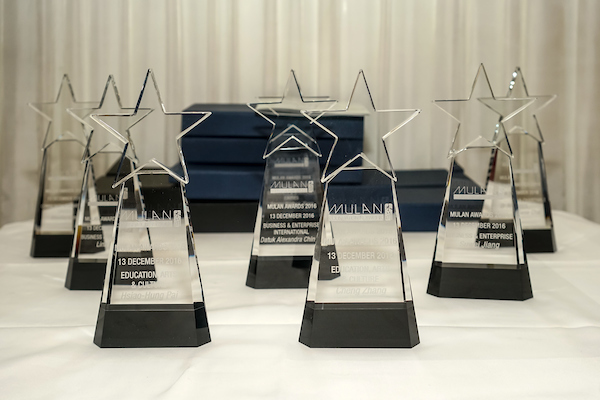 Contribution to Education, Arts and Culture

Well known Journalist and Writer born in Taiwan. She has made a great contribution in her coverage of Chinese migrants in the UK and in raising our society’s awareness of the Chinese community. Her areas of interest are migration and labour, women and feminism, and nationalism.

Her work has been published in leading newspapers and publications in the UK, China, HK and Taiwan; an example of many would be her piece for The Guardian where she covered the Morecambe Bay cockle-picking tragedy. She has also went undercover in many British workplaces to understand the plight of undocumented Chinese migrants in order to bring their circumstances to the forefront and to ultimately enhance their lives.

Senior Producer and Head of Programmes at Propeller TV. Her philosophy is to bring the best of Chinese culture to the western world and to bring the world to China.  She ensures this is achieved through her management of the channel’s TV contents which include in-house programmes: UK Lifestyler, News Feature, Keep Talking and Business World.

She launched the first China-UK Media Roundtable in 2015 in London through her work with the China Publicity Department and UK Trade and Investment (UKTI) where she acted as the bridge between the two governments and carried out in-depth communications to ensure full success.

Contribution to Business and Enterprise

French Wine Expert and General Manager of Wu Nu Shan France Holding in France, Owner of vineyards in Bordeaux. She has distinguished contributions to the art of wine making empowered by her determination to bridge the gap and promote better cultural understanding between France and China, and in the process enrich fellow wine connoisseurs in the UK and other parts of Europe and Asia.

She is much commended for advancing the techniques and appreciation of wine making and its cultural importance beyond a country with a renowned history in the art of wine making and whilst up against local experts.  She has achieved success in a Margaux vineyard in Bordeaux, France by being the first General Manager and Wine Maker from a Chinese background.  The Margaux vineyard is recognised as one of the most famous vineyards in the world.

Contribution to Business and Enterprise International

The ACCA has 188,000 qualified members worldwide and 480,000 students.  She is the first Asian woman and the first Malaysian to achieve this success in the organisation’s 111 years history and is only the 4th female to reach this milestone since 1904.  A truly impressive role model.

Equity Partner at PwC UK. She is the first Mainland Chinese to be made Equity Partner in a big 4 accountancy firm and to-date she holds the most senior position among the Chinese in PwC which is a remarkable achievement.

She also holds the position of the Lead Client Service Partner for Huawei Technologies, Bright Foods and Fosun Group across Europe and has made significant contributions in promoting positive Sino-UK trade and investment relationships. She helped the Institute of Chartered Accountants in England & Wales (ICAEW) set up in China and was instrumental in devising a ground breaking PwC/Tsinghua University Flying Start programme for students to take Chartered Accountancy qualifications from ICAEW while completing their university studies.

Contribution to Voluntary Work in the Community and Charitable Causes

Founder and Patron of MAP (Medical Aid for Palestinians). Her dedication to humanitarian work is exceptional.  As a full time orthopaedic surgeon in an NHS hospital she was able to pursue her humanitarian work for over 3 decades, often exposing herself to dangers in war torn areas.

Her efforts and perseverance have made a material difference to thousands of Palestinian refugees who cannot be more grateful for her relentless support, time and investment over their wellbeing.  Her charity, MAP, is now in its 32nd year.  A truly inspiring woman.

Charity and Community Volunteer to various organisations. She relentlessly devotes much of her time to charitable causes, promoting humanitarian needs and greater understanding between different communities and cultures and, along the way, empowering dozens of volunteers to similarly serve their community and give something back.

She has excelled in her leadership of the London Covent Garden Lions Club, having taken on the role of Club Chair followed by her current role as Zone Chair.  She continues to be much recognised for her involvement and is now being groomed as a potential future District Governor.  This would make her the first Chinese woman in the UK to receive such a nomination.

She has spent a good part of a decade in coordinating and organising community oriented events and fund-raising activities such as charity walks, bringing people together and offering time, commitment, mentoring and guidance at every opportunity.

Founder and first CEO of Yi Tian Yi Ren, an eye charity that has so far provided free-sight saving surgeries to 1544 patients struggling in blindness and poverty. A UK based practicing eye doctor and clinician scientist holding several honorary positions at Moorfields Eye Hospital, UCL Institute of Ophthalmology and the Royal Society of Medicine.